Where Do You Find Inspiration?

I made this flower arrangement recently for a 50th Birthday Party for my husband.  I thought I would show you my inspiration and how simple this was to make. 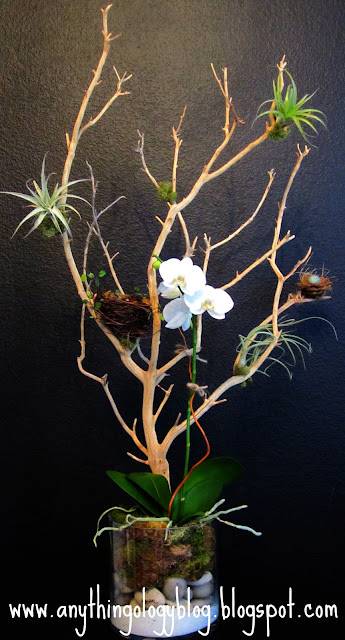 Every summer I take the kids to the Del Mar Fair, now called the San Diego County Fair, but we still call it the Del Mar Fair. Kind of like Costco used to be named Price Club and for years I still called it Price Club.   Anyway, while the kids enjoyed the rides I did a quick run through the flower exhibits to take in the beauty. This is the first year I let the kids go off by themselves for an hour while I enjoyed the exhibits.

I am always amazed and delighted with the creativity of the arrangements.  I thought you like to see some of them.  These are just pictures of the inside exhibits.  I'll show you the pictures of the outdoor landscaping exhibits in another post. 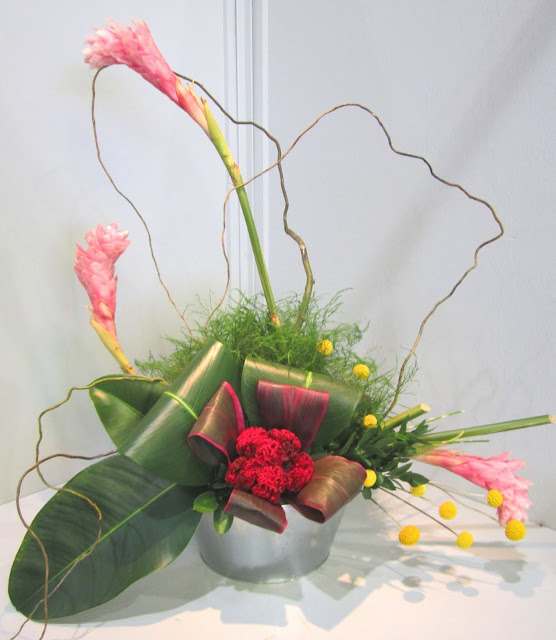 There was a Steam Punk vibe in many of the exhibits.
They used old rusted objects combined with delicate flowers.  ﻿ 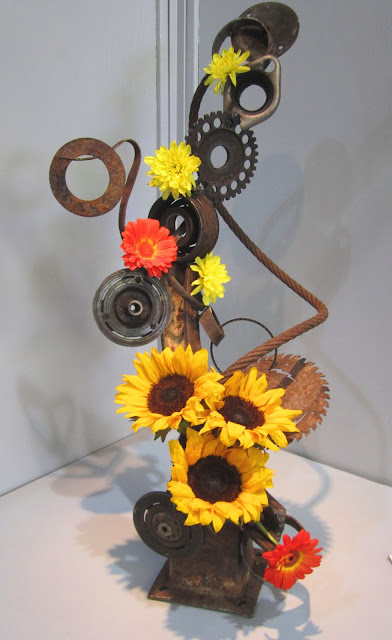 Ultra modern.
New metal, Artichoke flowers (I think?) and trimmed Philodendron leaves.
Who would think to put these two together, but I like it. 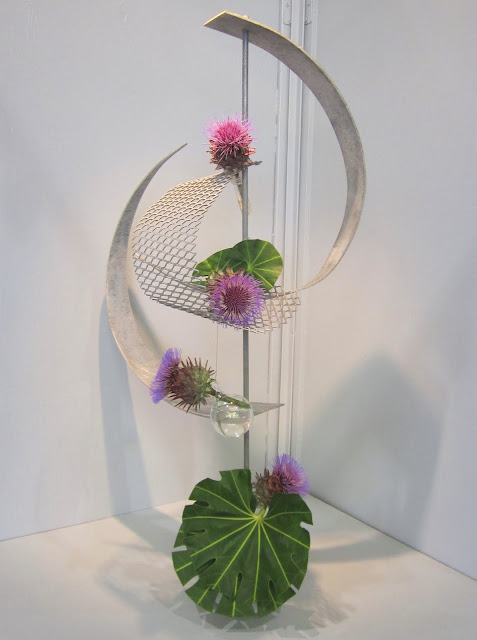 Re purposed chair and succulents.
Succulents were bigger than ever this year. 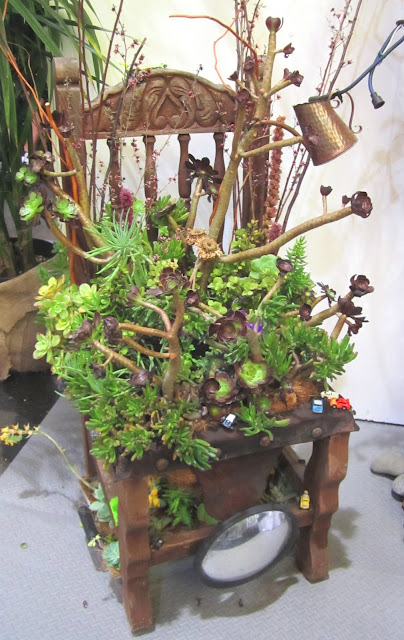 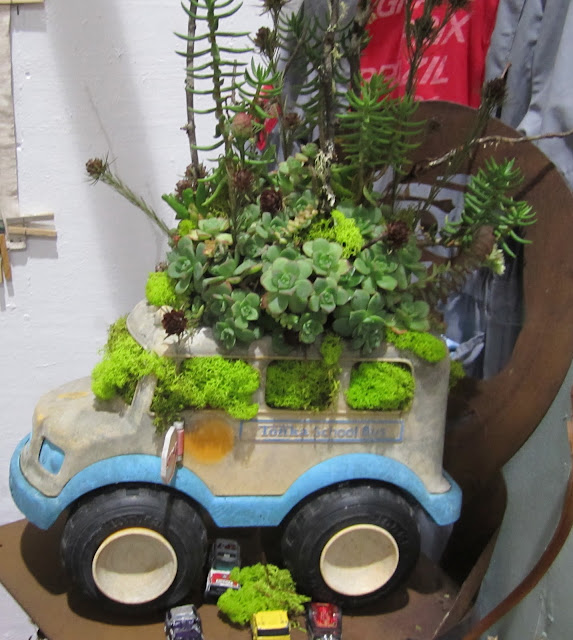 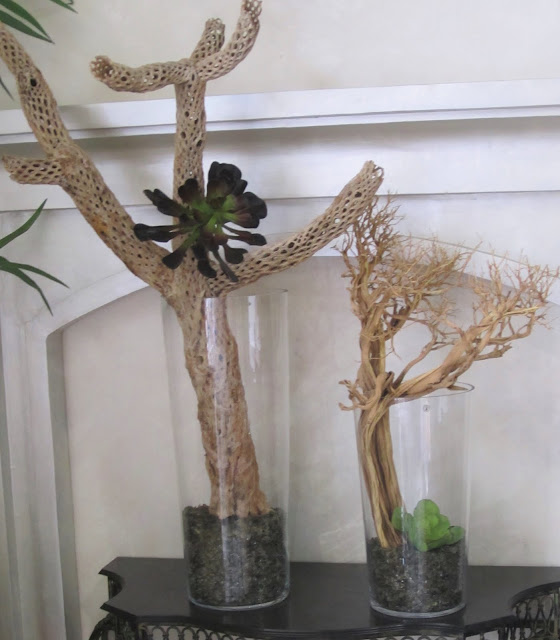 Who knew plastic lawn edging could look so good? 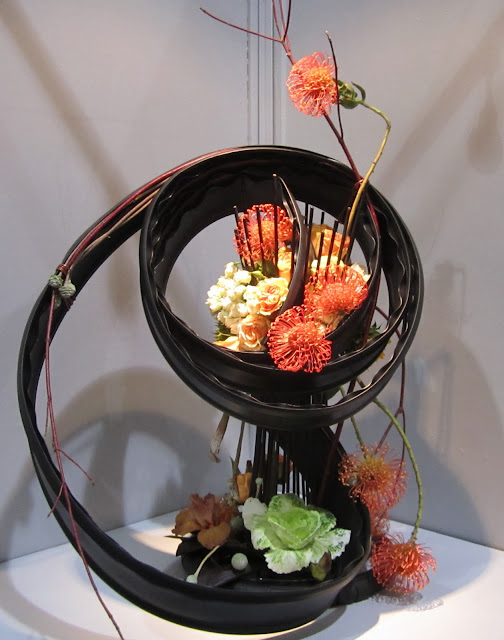 Maiden Hair Ferns and String of Pearls in mass.
I love all the green and this is such a simple doable idea. 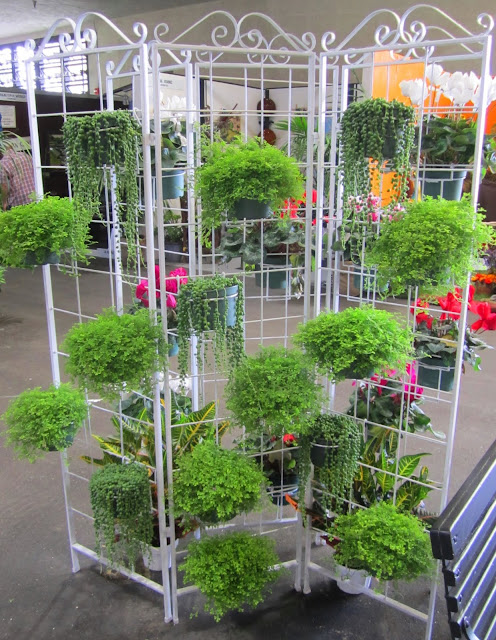 I like the white sticks.  This is great for a table setting center piece because the clear glass doesn't block the view of the guest sitting across from each other.  Don't you hate when you can't see the people across from you at a dinner party? 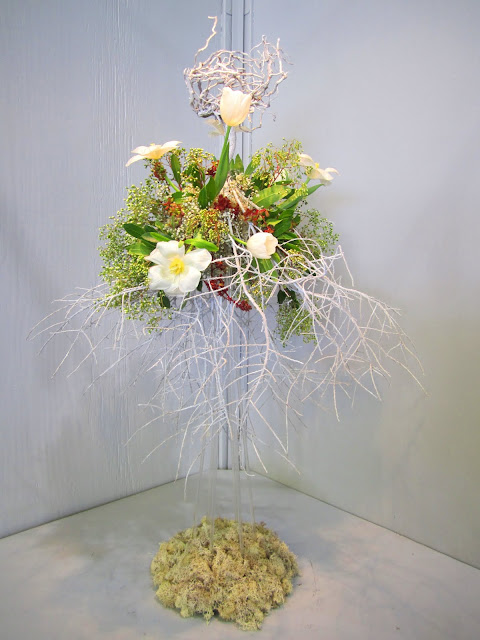 I took a picture of this Dahlia next to my fist so you could get an idea of how big it was.  Nice age spots.  Let this be a lesson out there to all you youngsters to wear sunscreen on your hands! 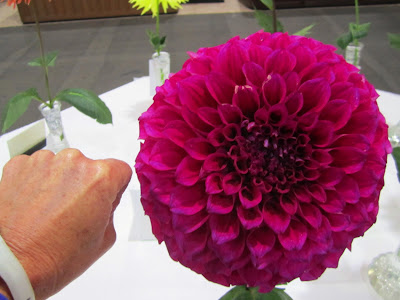 This one was even bigger. 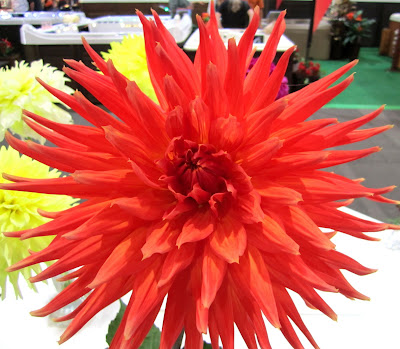 This was the inspiration for my much smaller and less grand arrangement.
This orchid and Bromeliad display stopped traffic.
Everyone that passed by couldn't help but admire the beauty.  I even saw some husbands that had been dragged in there with their wives stop to check it out.
Ladies, don't make your husbands go look at flowers, they don't want to, they're just being nice.
Be nice back and don't make them go. 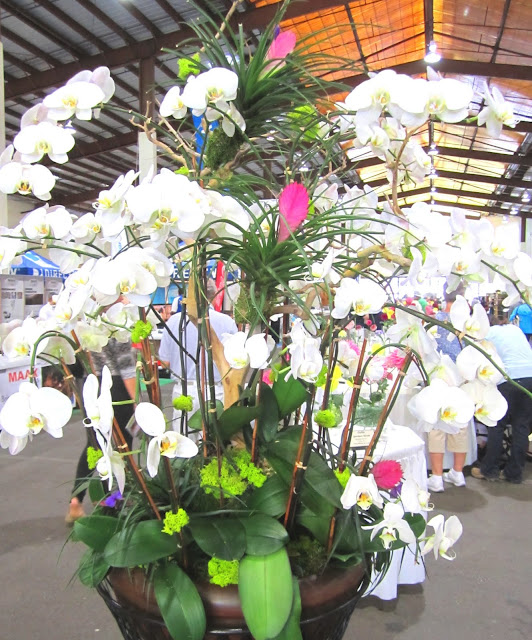 They used about a dozen orchids in this arrangement and attached the Bromeliads to the branches with fishing line.
This arrangement was huge, about three and a half feet tall. 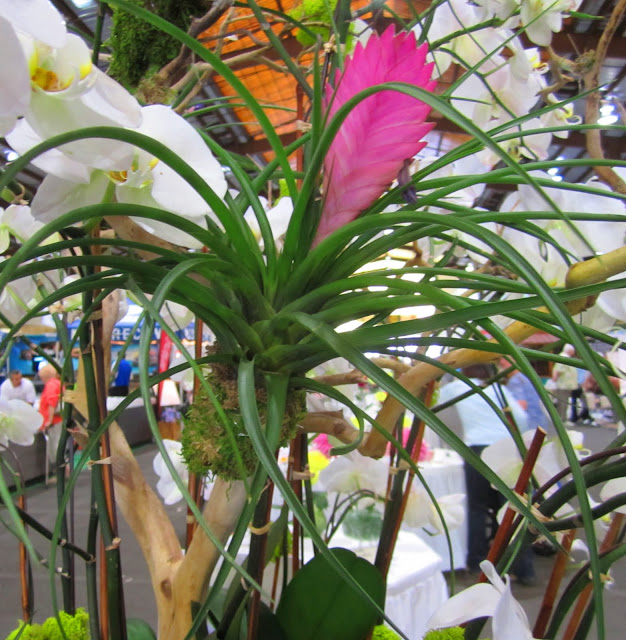 My arrangement is about two feet tall and because I had limited time and a very limited budget, mine is not grand, but it works for me.  It reminds me a little of a Dr. Seuss tree?  This is a party for a guy, so I didn't want the flowers to be too feminine.  It was inexpensive to make, really easy, AND it will last a very long time. 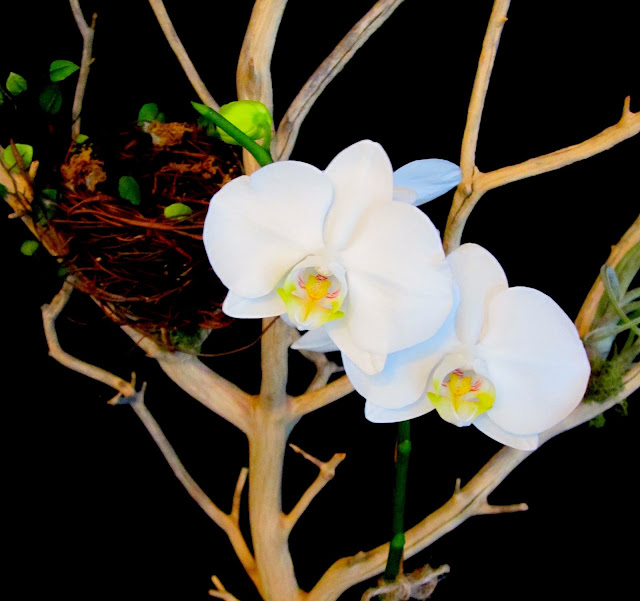 I used a $5 glass container and added sand and rocks to the bottom.  Next I stuck in a sandblasted Mansanita branch and a potted orchid.  The orchid was $8 at Home Depot.  I left the orchid in it's original plastic pot.  Then I covered up the pot with clumps of moss.  I added three succulent cuttings from my yard and hid the stems in the moss.  After the party I stuck the cuttings back in the ground to make a whole new plant.  I added a candle. 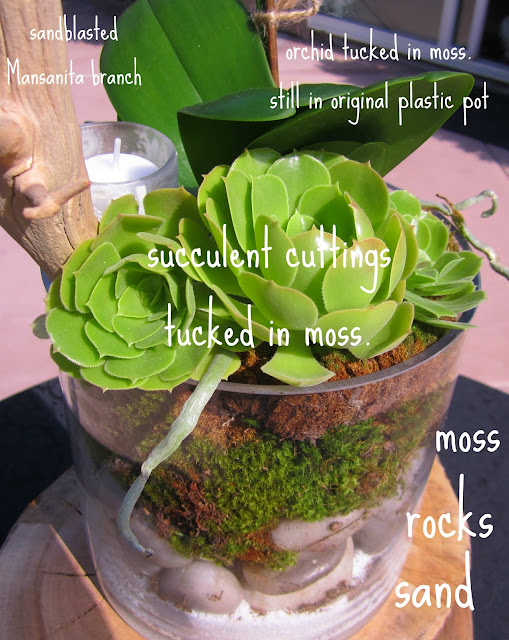 I hot glued some Tillandsias, moss, and bird's nests to the branches. 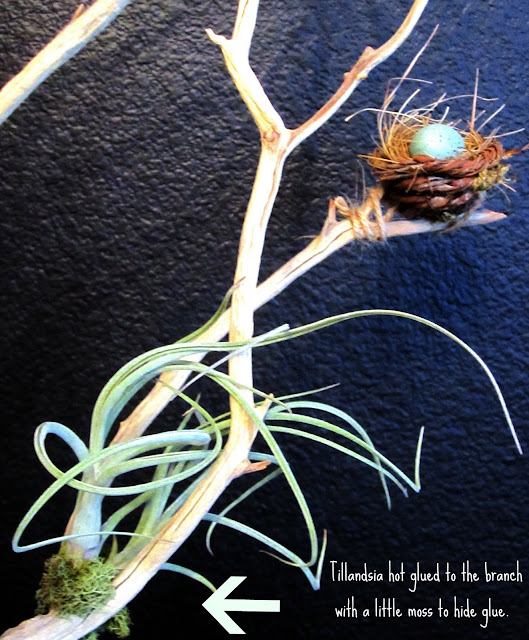 I placed it up against a black wall for the pictures.﻿ 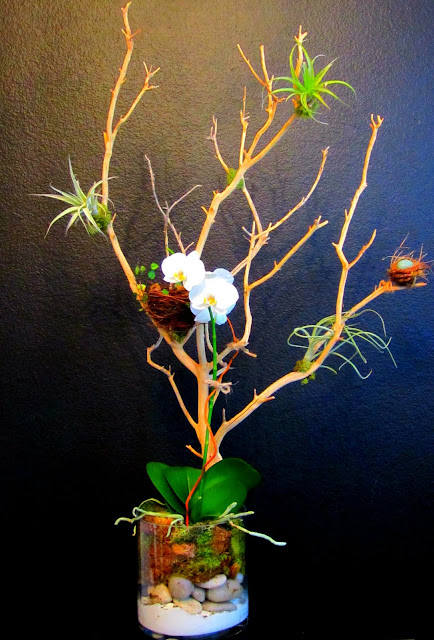 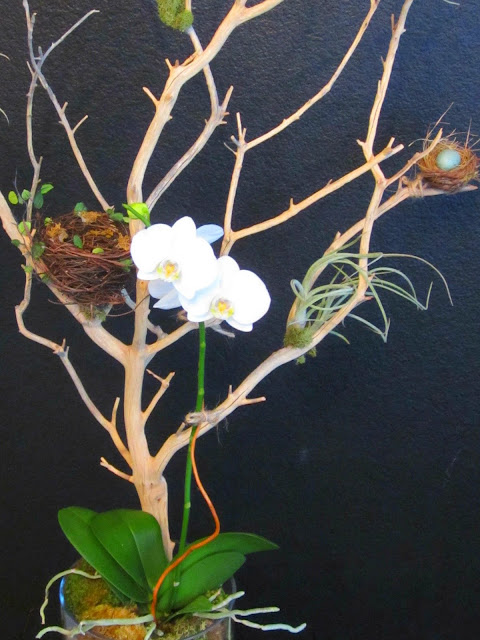 I placed it outside on a large stump on my appetizer table.  It doesn't photograph well here that's why I took some pics. of it up against the black wall.  You can see a little bit of the beginning of a living room I created outside for the party.  I also added a whole other dinning room this side of the back of the chair.  My poor husband is surrounded by estrogen.  He has a wife, two daughters, a girl dog, and a girl bunny.  He doesn't have a "man" space in the house so for his birthday I created an outdoor cigar smoking living room for him.  I pulled the two chandeliers out of our bedroom and hung them above the fire pit.  They gave off great light at night.
I pulled furniture from inside the house to create the outdoor room. 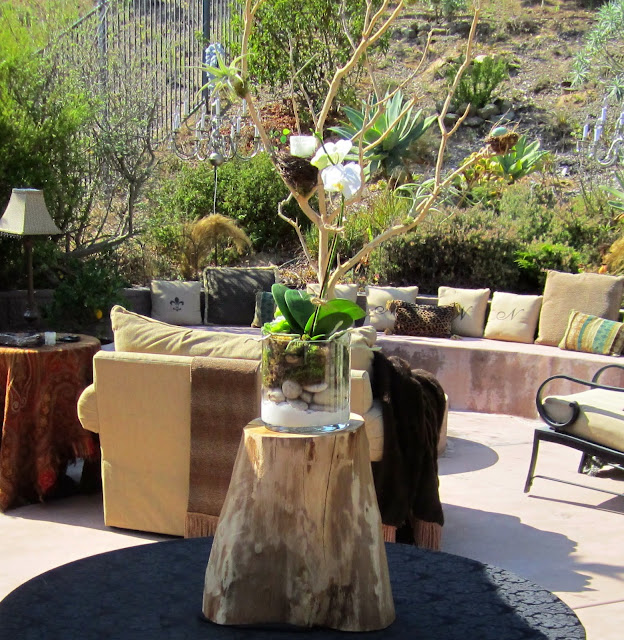 I made lasagna for about 60 people and some of them ate here by the fire pit.  My friend Kristy recommended using this recipe from Pioneer Woman.
I have a great lasagna recipe, but mine's not quick and easy.
This one was simple to make and delicious. 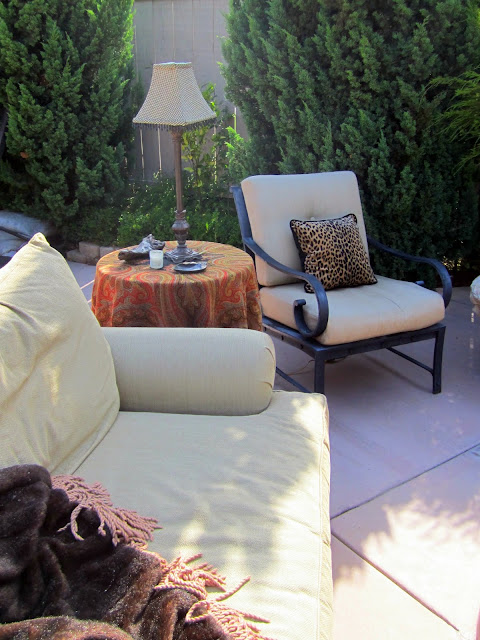 More people ate out here in our front courtyard. 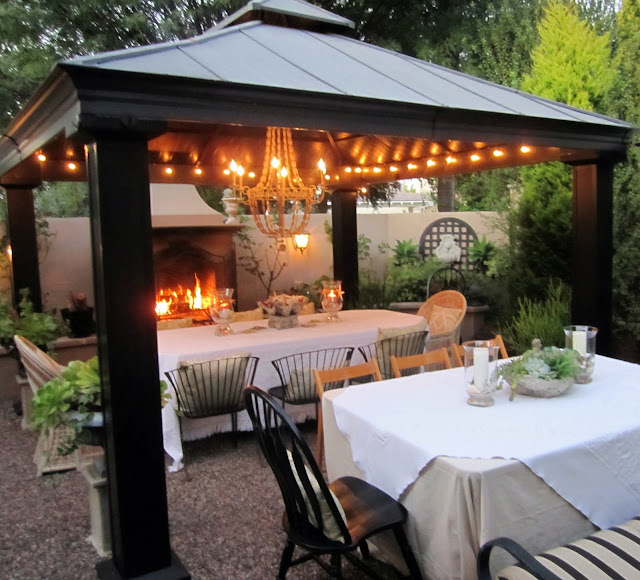 A good time was had by all and my arrangement still looks great a week later.
Where do you get inspiration?
Thanks for checking it out. 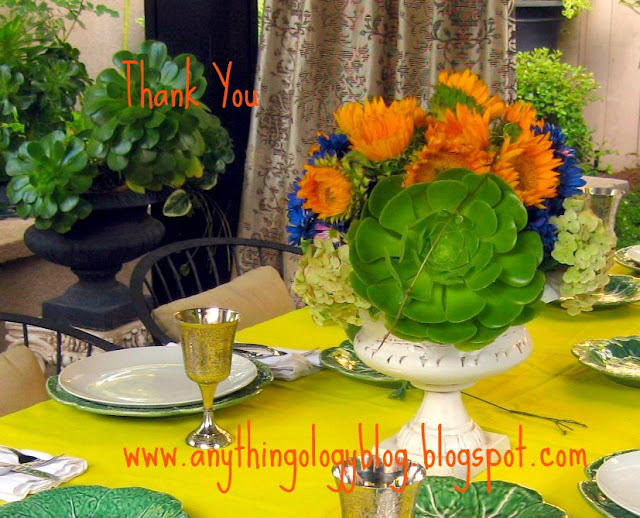