Is Organic Really Worth It? 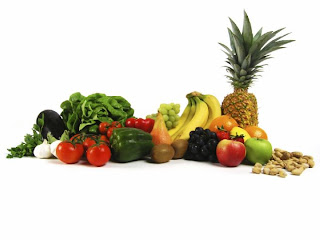 I try to feed my family the most nutritious food possible without breaking the bank, but do I really need to buy EVERYTHING organic, grass fed, free range, wild, fresh, locally grown, dye free, hand picked at the peak of it's ripeness? It can get pretty expensive! I read a great article which discussed how all organic food is not always worth the cost. "The Environmental Working Group (EWG) calculated that you can reduce your pesticide exposure nearly 80 percent simply by choosing organic for the 12 fruits and vegetables shown in their tests to contain the highest levels of pesticides. They call them the Dirty Dozen." Here they are listed from the worst to just plain bad.
The Dirty Dozen
celery
peaches
strawberries
apples
blueberries (domestic)
nectarines
sweet bell peppers
spinach
kale/ collard greens
cherries
potatoes
grapes (imported)

The EWG also listed the fifteen fruits and veggies that absorb such low levels of pesticides they aren't worth the organic price. The call them "The Clean Fifteen."
The Clean 15
onions
avocado
sweet corn (frozen)
pineapples
mango
sweet peas (frozen)
asparagus
kiwi fruit
cabbage
eggplant
cantaloupe (domestic)
watermelon
grapefruit
sweet potatoes
honeydew melon
I'm going to focus on buying organic for the Dirty Dozen and try to focus on growing in my garden what I can from that list too.
Posted by Unknown at 8:21 AM 1 comment:

These are two of our pets, Rosie our bunny and Roscoe our dog. We also have bull frogs and fish outside in our pond. These two live inside. 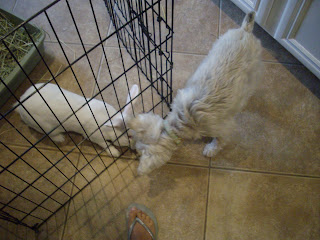 Rosie lives in the kitchen. She's a house bunny and is potty trained to a litter box like a cat. It took about two days for her to figure out the litter box. Rabbits usually like to go to the bathroom in the same spot every time, so you just place the box in the corner they have designated as the bathroom. They are very clean like cats. 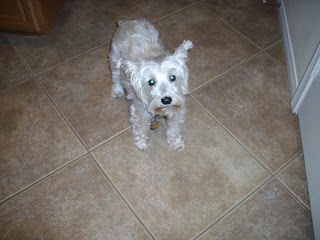 Roscoe is thirteen years old and she lives where ever she wants. I refer to her as my "first baby" because we've had her longer then the kids. I'm a much better disciplinarian with my kids then I am with my dog. I have never figured out how to control the barking issue? I started watching the Dog Whisperer too late! 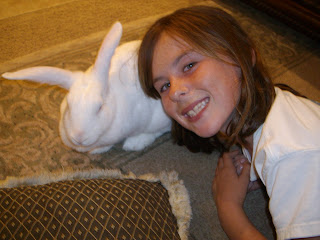 Cami is usually the one that takes Rosie out to play. The pet store said Rosie was a Dwarf-Lop Eared rabbit? They were completely wrong, but who cares we love her. 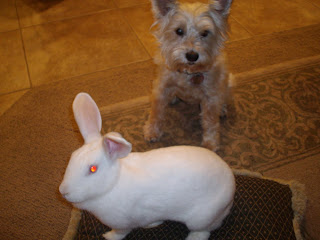 We can't let Rosie roam the house completely free because she likes to chew. She's particularly fond of carpet and electrical wires, so she must be supervised when she runs the house. She ruined the carpet in the living room. It was one of the reasons I decided to pull up the carpet and paint the concrete. 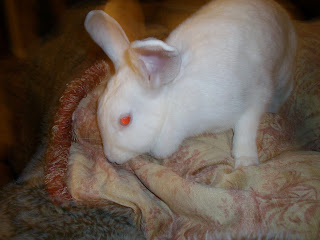 We've had Rosie for about a year. We rescued her from a very dirty, gross pet store. She was in the first pet store we went to. It was not a spur of the moment decision. We looked into adopting, but didn't find any bunnies with as much personality as Rosie. Rosie was just so friendly, she would nudge your hand like a dog to be pet. She was in a cage with a bunch of much smaller bunnies. The first time we saw her we left and continued the search. We came back about a week later and decided if she was still at the pet store we would get her. Her cage had not been cleaned in that weeks time. She was the only bunny left.
We had had her checked out by a vet. and she was healthy. It was meant to be! 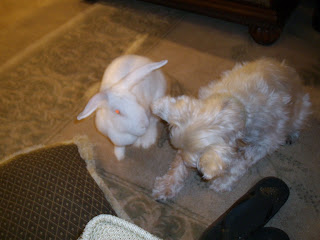 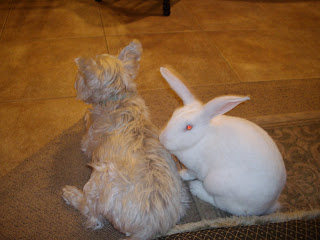 Roscoe tolerates Rosie like an old dog tolerates a puppy. Rosie is much more interested in Roscoe then the the other way around.
They will play when Roscoe initiates a game of tag. They race around the house, Roscoe barking of course, and Rosie jumping in the air like a bucking bronco. 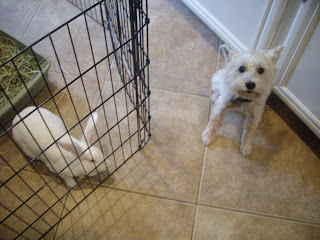 If you are thinking of getting a bunny just know it is a ten year commitment, yes they live that long. They require a never ending supply of hay and fresh water. They chew, but I've read it gets better when they are spayed or neutered. The litter box needs to be changed at least twice a week and they need companionship. Either human, friendly dog, or another bunny. The good news is NO BARKING!!! 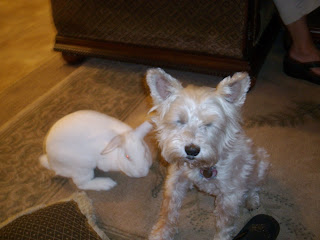 Most of the time Roscoe just ignores Rosie and takes a nap.
Posted by Unknown at 5:29 PM No comments: