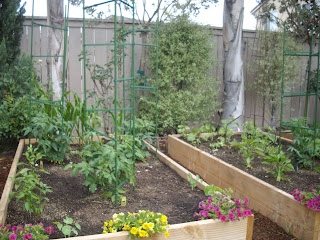 We only have a very small patch of lawn in the back yard. Now it's even smaller. I took an existing planter and made it bigger by removing some roses, a boxwood hedge, and about a five foot strip of grass. Roscoe our dog and Rosie our rabbit only need a little patch of grass. I wanted to rip almost all of the lawn out, but my husband wasn't keen on the idea.

I compromised and only removed about a third of my original plan. About two months ago my friend Kristy let me borrow her rototiller to make short work of the grass and I gave her the roses. My husband helped me transplant the hedge to the other side of the backyard. 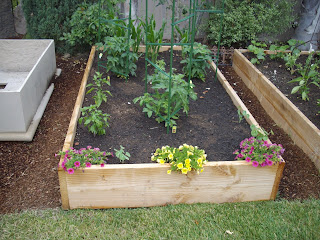 I bought nine 8'x 1' non-pressure treated redwood boards and a box of 3" screws at Lowes. The wood and screws cost about $84. If you're going to make veggie boxes don't use pressure treated wood. The chemicals will leach into your vegetables. Lowes was nice enough to cut three of them in half for me to make four foot sections for the ends. I hauled the wood into the back yard and made the boxes on the concrete slab. 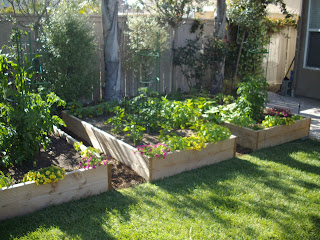 I drilled holes and attached each corner together with three screws. Then I placed the boxes about sixteen inches apart from each other. Just enough room to walk in between them. We have a truck that holds a yard and half cubic feet of soil. I had to make two trips to the nursery and haul all three yards into the back yard. I used an organic compost/soil mix and added worm casings. The whole project was very easy to do. It just requires a little muscle. The hardest part was leveling the boxes. 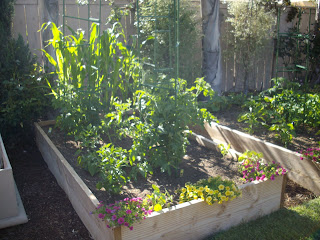 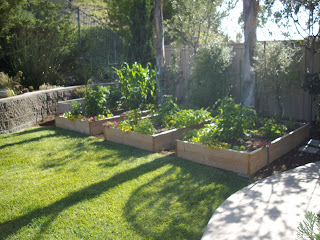 We have already enjoyed the herbs. Everything else needs some warm weather and time. 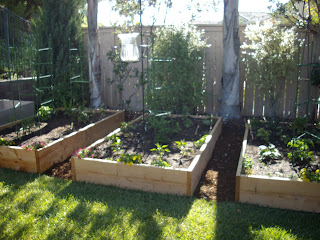 If I did this over again, I would have put wire mesh in the bottom of the boxes. We had a gopher episode, but that's another story. So far I have only had one snail. When his friends show up I'll be ready.
Posted by Unknown at 7:13 PM